La Venaria Reale is a “permanent cultural project” that offers a wealth of opportunities to learn, to feel new emotions and to make new experiences: it is a “contemporary court” awaiting to be discovered. It is also a journey through Italy and its glorious historical, natural and gastronomic heritage to celebrate “regality and the pleasure of living”.

La Venaria Reale is a grandiose estate just outside Turin. In comprises 80,000 square meters of floor surface in the Reggia and 50 hectares of Gardens, adjacent to the 17th century ancient village of Venaria and the 3,000 fenced hectares of the Park of La Mandria. It is a natural and architectural masterpiece that was declared part of the World Heritage by UNESCO in 1997. It reopened to the public in 2007 after completing the EU’s largest cultural restoration project to date.

The Gardens of the Reggia bring together an ancient and modern charm. Here the extraordinary balance between the archeological remains and the contemporary artworks is set in a boundless scenery that remains unparalleled among Italian gardens for the majesty and the vastness of the natural landscape that extends from the thick forests of the Park of La Mandria to the mountain peaks of the Alps.

The young Gardens of Venaria were inaugurated in 2007. Like teenagers entering a crucial phase of life, their distinctive features are starting to burgeon and their characteristic layout is becoming more evident: the process of natural evolution provides a unique experience that knows no parallel among the great historical gardens in Europe. A tour of the Gardens is always full of surprises, no matter how many times you have been to the estate.

In addition to a stroll or a guided tour with didactic activities, the trackless train Diana’s Arrow, the gondolas Diana and Hercules, and the Horse Carriage provide delightful alternatives to explore the Gardens. 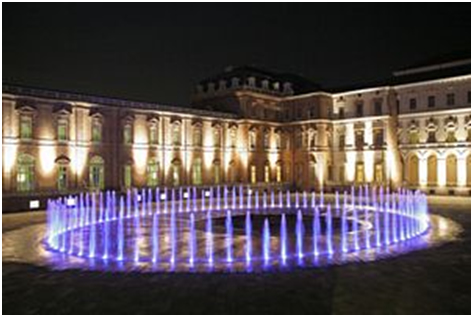 The water theatre at the fountain of the stag

The Court of Honor welcomes the visitor with its magnificent elegance. It also provides a unique vantage point for a full view of the Venaria and its historical peculiarities: different moments in time coexist in the architecture designed by Michelangelo Garove, Filippo Juvarra and Benedetto Alfieri, who followed Amedeo di Castellamonte in masterminding the expansion of the Reggia.

In the 17th century the vast area comprised between the Clock Tower and the Palace of Diana corresponded to two separate court yards. Only two buildings remain of the one that was used as a storage space for carriages: the porticoed wing where the clock tower rises today and the construction to the right, known as Castelvecchio, that predates the Reggia. The second court yard was known as the Grand Court, and it was here that the Fountain of the Stag once stood, decorated by marble statues of twelve hounds and four hunters chasing the bronze stag.

The layout of these spaces was redesigned in the 18th century to create a single Court of Honor: the old stables were replaced by the Great Gallery and the two pavilions at its ends, while the wing that separated the two court yards and the Fountain of Stag were dismantled.

Today the Fountain lives again through a historical tribute to the ancient ruins of the original foundations and part of its decorations, that lie at the heart of a 120-m wide ellipse, restoring the balance of the Court.

Today the Water Theater, with 288 water jets reaching as high as 9 meters, color light projectors and steam pipes, is one of the most fascinating and chorographical fountains in the world.

How to reach the Reggia of Venaria